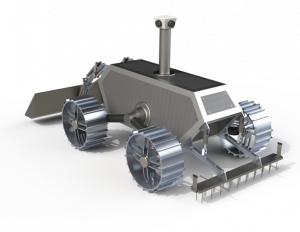 One of only three university-led projects selected by NASA to develop technologies for living and working on the Moon, the ultimate goal of the ASPECT project is the autonomous creation of a safe and efficient lunar landing site. This will be achieved by preparing the lunar surface through the relocation of rocks, moving of regolith and leveling, grading and compaction of the site to support construction of a landing pad for a large lunar lander.

Colorado School of Mines, the world’s leading university in the use of space resources to enhance humanity’s presence in space, is leading the ASPECT project in collaboration with Lunar Outpost, Michigan Technological University and Bechtel. Lunar Outpost is providing the project’s Rover Mobility Element based on their spaceflight-ready line of MAPP lunar rovers and HOUND terrestrial autonomous robots.

“LuSTR sets the stage for the future of frequent, large-scale lunar surface operations that will one day support the NASA Artemis missions, while simultaneously developing technologies useful around the Solar System – the Moon, Mars, and even extreme environments here on Earth,” said AJ Gemer, Chief Technology Officer of Lunar Outpost. “As the leading spaceflight mobility provider, Lunar Outpost holds the expertise, capabilities, and relationships necessary to provide autonomous robotics for a wide range of extreme environment mobility needs, both on Earth and in space. As the cadence of lunar missions increases over the next decade, Lunar Outpost will leverage our leading planetary mobility platforms to provide lunar infrastructure operations, servicing, and maintenance as services to commercial and government operations.”

Early lunar site preparation will not only minimize human planning and intervention on the Moon but also will maximize the safety of the Artemis missions. The ASPECT project will ensure the safety of the Artemis mission landings while also demonstrating an application of Lunar Outpost’s dual-use technologies that provide value both in space and on Earth. The Earth analog to the ASPECT rover, known as HOUND, is utilized in industrial applications for a variety of industries, including oil and gas, construction and defense. Lunar Outpost’s HOUND rover enables autonomous site inspection and preparation, providing value to a wide range of customers here on Earth while simultaneously supporting the development of key future spaceflight technologies.

For this project, Lunar Outpost is leveraging expertise in dust mitigation and thermal technologies from the development of its line of MAPP rovers to deliver a robust, cutting-edge Rover Mobility Element to support the ASPECT lunar excavation and construction tools.

Leading the project, Mines will provide expertise on autonomous construction tasks, lunar geology and terrain, and lunar regolith manipulation. The university is home to the Space Resources Graduate Program, the first program in the world focused on how to locate, access, use and develop the resources beyond Earth.

To round out the project team, Michigan Tech will provide the compaction mechanism and invaluable modeling expertise to analyze and validate the properties of the landing pad and demonstration. Betchel will provide a subscale vacuum test that will mimic the eventual function of ASPECT on the Moon.

The ASPECT project will culminate in a terrestrial demonstration of the autonomous construction of a future lunar landing pad on the Mines campus in Golden, Colorado.

“Colorado School of Mines is excited to lead this exceptional ASPECT project team,” said Christopher Dreyer, Professor of Practice in Mines’ Space Resources Program and the principal investigator on the project. “ASPECT will lay the groundwork for the surface construction and mining on other worlds.”

Lunar Outpost is an advanced robotics company with a focus on developing technologies that have both Earth and space applications. Lunar Outpost recently made history as the first commercial company to collect payment for a space resources contract, which was awarded by NASA Administrator Bill Nelson at the Space Symposium in August 2021. This payment was for a mission currently slated to send the first rover in human history to the lunar south pole on a 2023 mission to deploy Nokia’s 4G lunar network as part of NASA’s Artemis program. Additionally, Lunar Outpost took part in the first-ever ISRU demonstration on another planet when MOXIE, onboard the Perseverance rover, produced oxygen on Mars. Learn more at lunaroutpost.com.

About Colorado School of Mines

Colorado School of Mines is a public university focused on science and engineering, dedicated to educating and inspiring students, advancing knowledge, and innovating to address the great challenges society faces today—particularly those related to earth, energy and the environment. Founded in 1874 with specialties in mining and metallurgy, Mines’ scope and mission have expanded to meet the needs of industry and society, producing distinctive graduates and revolutionary innovations, and becoming a world leader in advancing sustainable use of the Earth’s resources. Learn more at mines.edu.