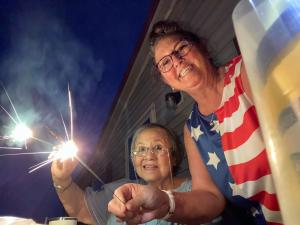 Kazuko Regnier, a Japanese war bride, lives with her daughter in Fordland, MO and gets help by utilizing a little-known VA benefit for surviving spouses. of wartime veterans. 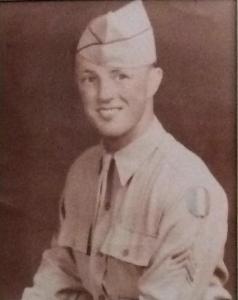 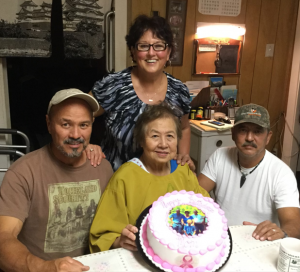 With all three of her children, Kazuko Regnier is seated with her son Frank (on her right), Ron (on her left) and daughter Joanne Banks standing.

One of few remaining Japanese war brides living in the Midwest shares her story and gives tip on how to access VA benefits for senior care.

Regnier, with her daughter’s help, is able to live independently with the assistance of a little known VA benefit for elder care based on her husband’s military service.

Regnier’s husband, Ellis Regnier, was a sergeant in the U.S. army and was stationed in Japan. According to his DD2-14 paperwork, Ellis enlisted in the Army in 1937, prior to World War II. He served during both WWII and the Korean War. He arrived in Japan in 1947. He met Kazuko and they married in 1951 in Kobe, Japan. Ellis was 35 and divorced. Kazuko was 20.

The War Brides Act of 1945 allowed servicemen to bring the wives they married while stationed abroad to the United States on a non-quota basis. This was without regard to racial exclusion laws. This act ended in 1948 but was re-instated in 1950.

Kazuko lived in Korea, Japan and Germany before settling in the Midwest. Together, she and Ellis had 3 children, Joanne, Ron and Frank. Joanne recalls living in Germany at age 4 or 5 and speaking German. Eventually, Ellis brought wife and family to the Midwest. After leaving the military, he worked at IBM.

Ellis died at age 87 in April 2003. After his death, in her senior years, Kazuko went to live with her son Frank in Lawrence, KS then moved in with her daughter Joanne.

Kazuko stays active with her friends and family including six grandchildren bringing her culturally diverse life to the small Midwestern town of Fordland. Her daughter cooks both Japanese and American cuisine for her and takes her to nearby concerts. “She loves ENKA and one of her favorite singers is Misora Hibari,” says Joanne.

Banks said her mom got sick about seven years ago and knew she needed more care. She didn’t qualify for Medicaid, so a caseworker recommended Veterans Home Care’s VetAssist Program. Kazuko was eligible as the surviving spouse of a wartime veteran.

“I would do this again for my mother in a heartbeat,” says Joanne about contacting Veterans Home Care. “I’ve recommended their service to others. It’s a lot of paperwork to get started but it’s well worth it.”

There are others who offer free help with the VA Aid and Attendance application but Veterans Home Care is different in that it gets care started right away, even before VA funding arrives.

Kazuko and her family are sharing their story so others can learn about VA benefits for senior care. Certain wartime veterans or their surviving spouses who choose to use their VA Aid and Attendance benefit primarily for in-home care, or adult daycare, are eligible.