The DJI Mavic 3 Classic launched in the fall of 2022, almost exactly one year after the launch of the more-capable Mavic 3 and Mavic 3 Cine drones. The newer model is designed to be more affordable for consumers, and we’re pleased that DJI managed to bring the price down without sacrificing the camera.

We’re also pleased that DJI did not remove any flight or safety features, landing the Mavic 3 Classic on the list of best drones around. In particular, we’re talking about all-direction obstacle avoidance sensors, and over 45 minutes of flight time.

Like most Mavic drones, the Mavic 3 Classic is a folding quadcopter with a camera hanging under the nose of the craft. The entire Mavic 3 series is a bit larger than the older machines. The extra size and weight allows for the larger camera, and a larger battery. Rated for up to 46 minutes of flight time, we’d say it’s worth it.

All-direction obstacle avoidance sensors are backed by APAS 5.0, which is DJI’s safest and most reliable self-guided flight system to date.

The Mavic 3 Classic connects to a few older DJI remote controls. A pleasant change from having to buy new gear every time. And it accepts most parts and accessories from the other Mavic 3 drones. In essence, if the Mavic 3 Classic had launched last year, we wouldn’t question where it fits in the line: the Mavic 3 Cine is the best of the best, the Mavic 3 is just as capable, but without an SSD, and the Classic is the consumer-grade entry.

In summary, the Mavic 3 Classic does not get the secondary camera with tele lens, cannot add an internal SSD, and cannot record in ProRes format, but is otherwise just as capable in the sky. The Micro Four Thirds camera is as good as most M4/3 DSLR cameras with comparable lenses. The lens on the Mavic 3 Classic is not a dedicated interchangeable mount though.

The O3+ transmission system creates a fantastically stable connection to the remote control, resulting in near-immediate response on the sticks, and effortless navigation in the sky. The Hasselblad 20MP camera shoots silky smooth 5.1K video, and clear still photographs.

The most important part about enjoying a drone is actually flying it, in that the Mavic 3 Classic shines. 46 minutes of flight time is a huge deal for most pilots. The vast majority of drones offer less than 33 minutes of flight, making the Mavic 3 series a clear standout.

The available accessories, including ND Filters, and a Fly More Kit with extra batteries, drastically extend the usability of the Mavic 3 Classic.

In the end, the Mavic 3 Classic is a reliable and safe drone, that is fun to fly, and produces quality media from the sky. The starting price is much easier to swallow versus the original Mavic 3 drones, we think DJI got it right!

What we don’t like about the DJI Mavic 3 Classic

In typical DJI fashion, the Mavic 3 Classic has limited actual configurable parts. We totally understand that the SSD in the Cine model is a major upgrade, but there’s no technical reason why that couldn’t have been a user-swappable part, with a simple firmware update.

Pilots in the racing world understand this idea. They buy a frame, then they may make dozens of parts and accessory swaps over the life of the craft. Trying out different propellers is common practice. So is swapping cameras. The Mavic 3 series is a specialized piece of equipment, we do not expect full configurability, but it’s a huge price jump to get from the Mavic 3 Classic to the Mavic 3 Cine, we could have done that in stages.

The DJI Inspire 2 is the prime example of this strategy, the interchangeable payload has given that airframe over six years of shelf life. The Mavic 3 will likely expire in half that time as newer cameras become available.

Honestly, though, these complaints are not exclusive to the Mavic 3 Classic. This craft really is a compelling machine for any potential pilot.

Right from first boot, the Mavic 3 Classic raced to flight-ready in good time. We had a large firmware update to process, for the drone and the remote, so we had a little delay before our first flight, but, that battery lasted through the update, then still gave us about half hour in the sky. Our second battery went a little over 40 minutes, landing with 12% remaining.

With a top speed of over 40 miles per hour, and big powerful motors, the Mavic 3 Classic is a blast to fly. Horizontal movement is tempered by software controls, but the vertical take-off speed is largely unencumbered. Getting from the ground up to 400 ft takes very little time. We did not specifically test this speed, but one of our videos shows about twenty seconds from about six feet up to max legal altitude.

Obstacle avoidance worked very well. This time of year there are many leaves falling and bare branches to watch out for. We’re glad to report zero collisions or mishaps with the drone.

We’ve also had crazy wind in our flight area lately, we successfully captured stable video from the sky with winds up to about 11 mph. We did not, however, brave the higher winds.

When we talk about connectivity range, the Mavic 2 Classic uses O3+. That’s a new version of OcuSync, if you were wondering what the “O” was for. DJI’s proprietary technology is now capable of transmitting a 1080p video signal up to 15KM. This should offer a solid connection to as little as 1KM in a dense urban area, which is still far beyond the legal line-of-site rules in most countries around the globe.

The Micro Four Thirds sensor on the Mavic 3 Classic should not be underestimated. This is a Hasselblad built unit with a 24mm lens, f/2.8 – f/11 aperture, 84 degree field of view, and a 3x digital zoom.

The camera gimbal has a nice amount of range. We were impressed with how far upward it can tilt without getting the nose of the craft in view. The gimbal has a wider range when operating autonomously, but you have controls to operate from straight down (-90 degrees) to 35 degrees upward.

Should you buy the DJI Mavic 3 Classic?

The DJI Mavic 3 Classic is the first drone since the Mavic 2 Pro that we can confidently recommend to budget-constrained pilots who care more about camera quality than flight features.

The starting price of $1,469 is still in the upper range for consumer drones, but it’s a DSLR-caliber camera for a DSLR camera price, and it can fly. Of course, that price point does not include a remote, you’re looking at $1,599 to include the RC-N1 remote, or $1,749 for the DJI RC remote. From there, you can buy the drone alone, then buy the DJI RC Pro for $1,199 to get the best possible control experience.

If you need more, the DJI Mavic 3 and Mavic 3 Cine include a secondary camera. This extra unit is a Tele camera, built into the same gimbal. It offers up to 28x zoom. The Cine model also includes a 1TB internal SSD and the ability to record in the ProRes format. For reference, the Mavic 3 Classic can record video at up to 200Mbps, while ProRes 422HQ runs at a whopping 3,772Mbps.

The Mavic 3 series continues the Mavic trend of having fixed cameras. if you require interchangeable payloads and lenses, the Inspire 2 is still top drone. Though, there’s rumor of an Inspire 3 in the near future. Sony’s AirPeak system is also a compelling consideration.

If these are just too much for your needs, or your wallet, the DJI Air 2S remains at the top of our list of favorite drones. It squeaks in at just under $1,000. The Mini series is your next best bet going down from there. The Mini 3 Pro is quite capable, but the Mini 2 is still the best drone we’ve flown for under $500.

We really like the DJI Mavic 3 Classic. It’s easy to fly, feels stable and reliable, and we really like the resulting photos and video from the sky. We appreciate some of the finer manual controls of the camera, though full-auto produces great shots. We think you’ll like this drone as well. 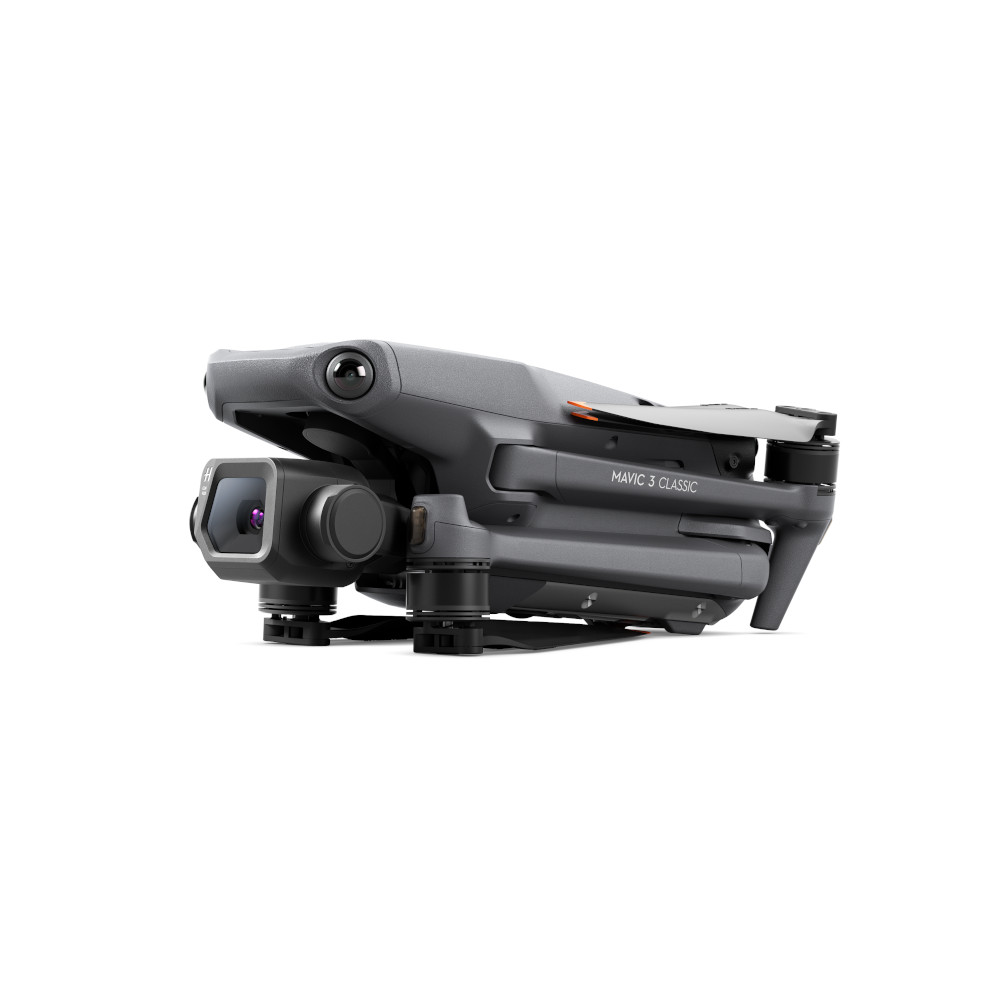 Like the Mavic 3 before it, the Mavic 3 Classic offers a 20MP Micro Four Thirds camera, 5.1K video, and 46 minutes of flight time. A few concessions drop the price significantly.